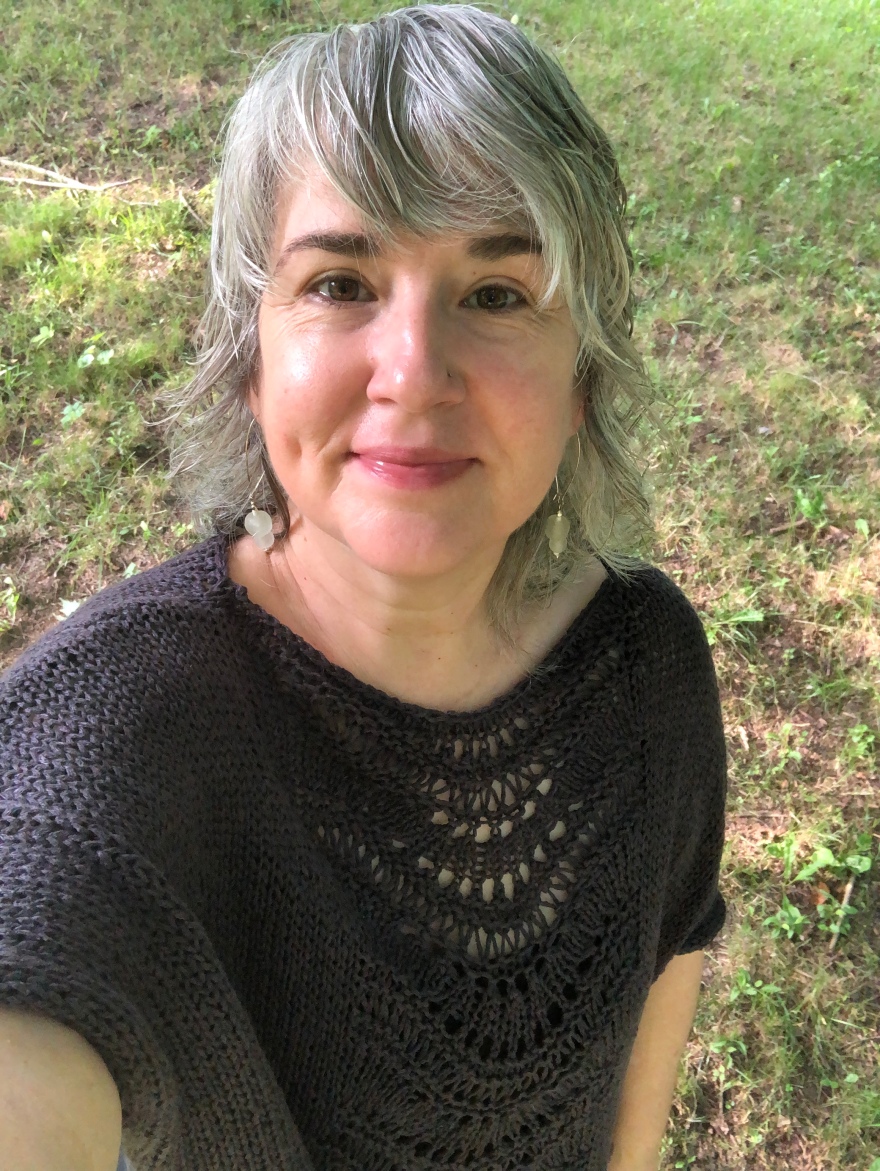 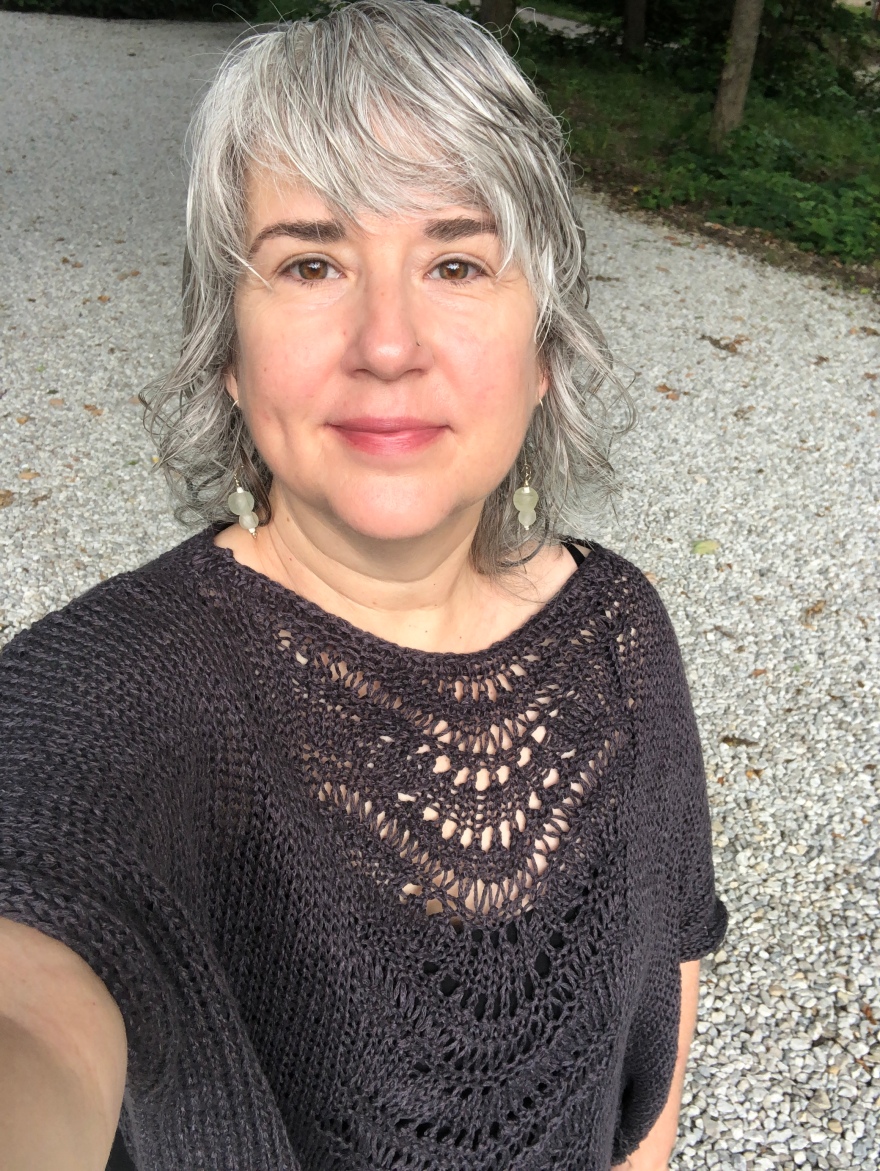 I finished my Deschain Tee! I knit one sleeve then realized the design is much better on me without sleeves. So I frogged the sleeve and finished the armholes the same as the neckline. I’m wearing it here with my linen lantern skirt over a camisole. It feels great to finish something.

I finished one sock and cast on the second immediately as recommended by Blogville Knitters.

Yesterday I spent most of my day binge watching Outlander and casting on. My new Arachne yarn arrived and I caught up to where I had previously knit on my ill-fated first attempt. 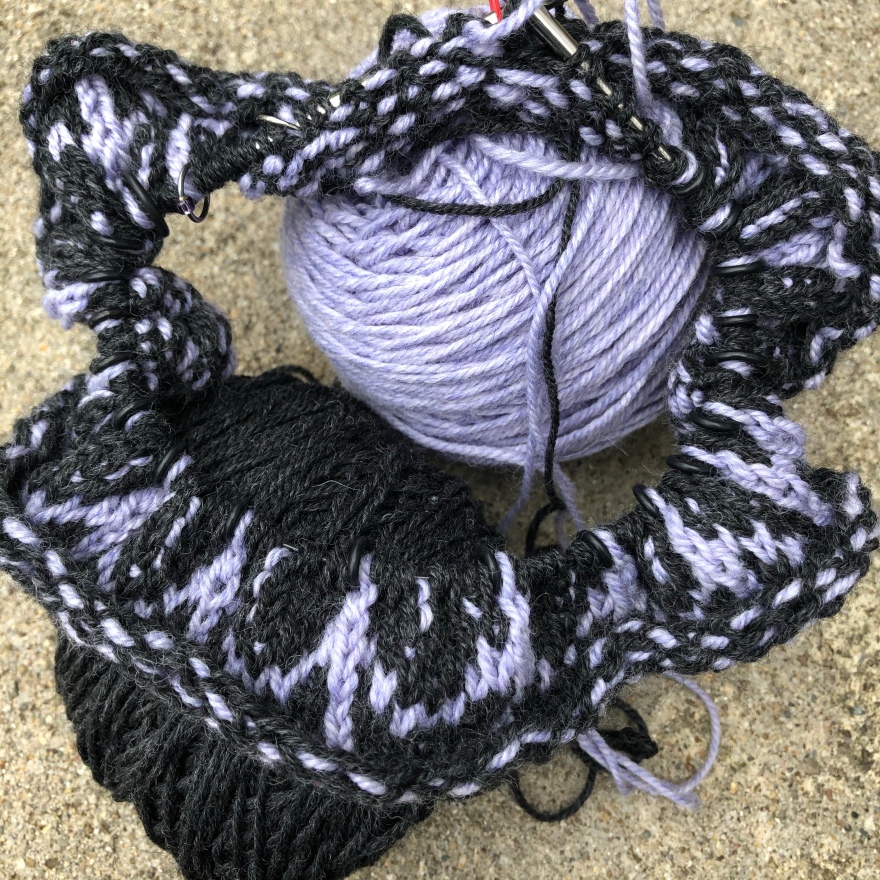 I love it! This yarn is Quince and Co Chickadee Heather in Sabine and Hydrangea. I looked through projects on Ravelry and someone else had used this yarn for Arachne. It’s lovely and soft and didn’t break the bank.

I also cast on Deschain yesterday. Several years ago, when I started knitting again, this was the first project I wanted to cast on. I purchased the pattern on Ravelry through my local yarn shop, which I thought at the time was fairly miraculous. I had planned to use something from my stash, but I’m glad I didn’t try it. This is also Quince and Co yarn: Kestral in Ash. I’m sewing a lantern skirt in black linen to wear with it, and I’ll probably sew a black knit tank top to wear under it as well.

I made it to Douglas Henshall’s entrance on Outlander. Let’s face it, that’s probably the only reason I am watching it. Does it have Douglas Henshall and knitting in it? I’m in. But if I hear “Coming Through the Rye” one more time…

This weekend I thought we could “lean in” as they say, and I talked Bob into watching The Stand with me. I thought it would tick my horror box and be amusingly ironic. I forgot how truly unwatchable it is. By the end of Episode 3, I had completely lost interest, laws yes. M-O-O-N that spells Stephen King. We’re going to try The Outsider today. We enjoyed Castle Rock.

It’s official! I went outside today (to take photos for my blog)!

It’s pretty out there.